We got Oz [Oscar] from the animal shelter when Tracy was 7, and now she is 28. He was barely six weeks old, could not yet eat cat food, and probably weighed half a pound. But he was a survivor. 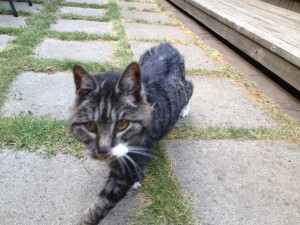 Needless to say, he lived a long and happy life here at Wetland Wool farm. We had hoped he would just pick his moment and wander off into the woods at the end his life, but it didn’t quite work out that way. When we took him to the vet in mid-September, his bony old body weighed just 6 pounds–a decade before, he weighed 15 and the vet called him “obese.” He’s buried next to Rob, in recognition of the 12 years they had together.