In the beginning, we had three ewes.  It was 1988, and we realized we needed field mowers that were not cows or horses.   John bravely went out to several local farms and chose one ewe with her  lamb from each place.  Imagine how overwhelming it is:  the shepherd brings his 25 or 50 sheep into the barn, pens them up, and invites you to “choose one” of the teeming, hollering mass of sheep.  He came home with Mrs. Romney, Mrs. Lincoln, and Mrs. Suffolk, each with a ewe lamb.

Mrs Suffolk arrived with plenty of attitude.  She was low to the ground rather than long-legged like most Suffolks.  Her face was freckly, not evenly black.  Her lamb, aptly named Miss Suffolk, was a much more classic Suffolk ewe with dark head and long, dark legs.  Mrs. Suffolk was nicknamed “goat” because she had horn stubs on her head and that stubborn streak already alluded to.  Over four years, Mrs. Suffolk gave us seven more lambs.  She always had tons of milk and her lambs grew very fast.

Scarlet, born in 1991, carried Mrs Suffolk’s line forward to this very day.  Scarlet had a ewe lamb named Carla in 1993, and Carla had Caren in 1997.  Caren, amazingly, gave us 16 lambs over her lifespan.  She had terrible wool but was the most wonderful mother, and her tragic tale of courage as she raised triplets after a crippling dog attack will be told another day.  One of Caren’s triplets is Carole, born in 2005 and with us to this day.  Carole has classic old-style Romney locks, very strong and full of shine.  Carole’s daughter Clarissa was born in 2010 and promises to carry on this most enduring of our original sheep lines.

Susan is going to tell the story of Scarlet’s birth, as it was certainly a significant moment in her life and in the life of our farm.

And I will differentiate myself by having a different color behind what I write!

So while all the other kids had their heads in the clouds over Kurt Cobain, my occupations in the early 90s were considerably more down to earth.  Coming home from school and tending to matters of the farm including laboring sheep was completely normal, but this was to be an exceptional day.

I came home from school that day – must have been about 4:00 or so, and as I walked in the driveway the first thing I did (as always, and especially during lambing season) was scan the hillside for sheep and see that everyone is accounted for.

Immediately I see Mrs Suffolk in labor up at the top of the hill.  She appears distressed, agitated. I ditch my things, not bothering to change my clothes, and head on up the hill.  As I proceed I watch her lay down, get up, paw at the ground, lay down, get up again. Nearing her, I can see that yes, there is definitely something sticking out, and it is dark purple, and dirty.

Clearly the ewe is in a state of intense discomfort and I realize the first thing I have to do is find a way to help her without exacerbating her distress.  She drags the dirty dark purple thing unwittingly in the dirt while thrashing about. Closer now, I see that this dirty, dark purple thing has a tongue. It is the very swollen head of a lamb who is stuck and probably has been stuck for quite some time.

Now, lambs are not really supposed to come out head first.  Here’s a drawing.  The one on top shows a normal presentation, where the feet emerge first.  You can see that this alignment makes for a more streamlined passage through the birth canal.  The second figure shows how this particular lamb was presented.  Having front feet folded up means the shoulders and legs have to go through together: 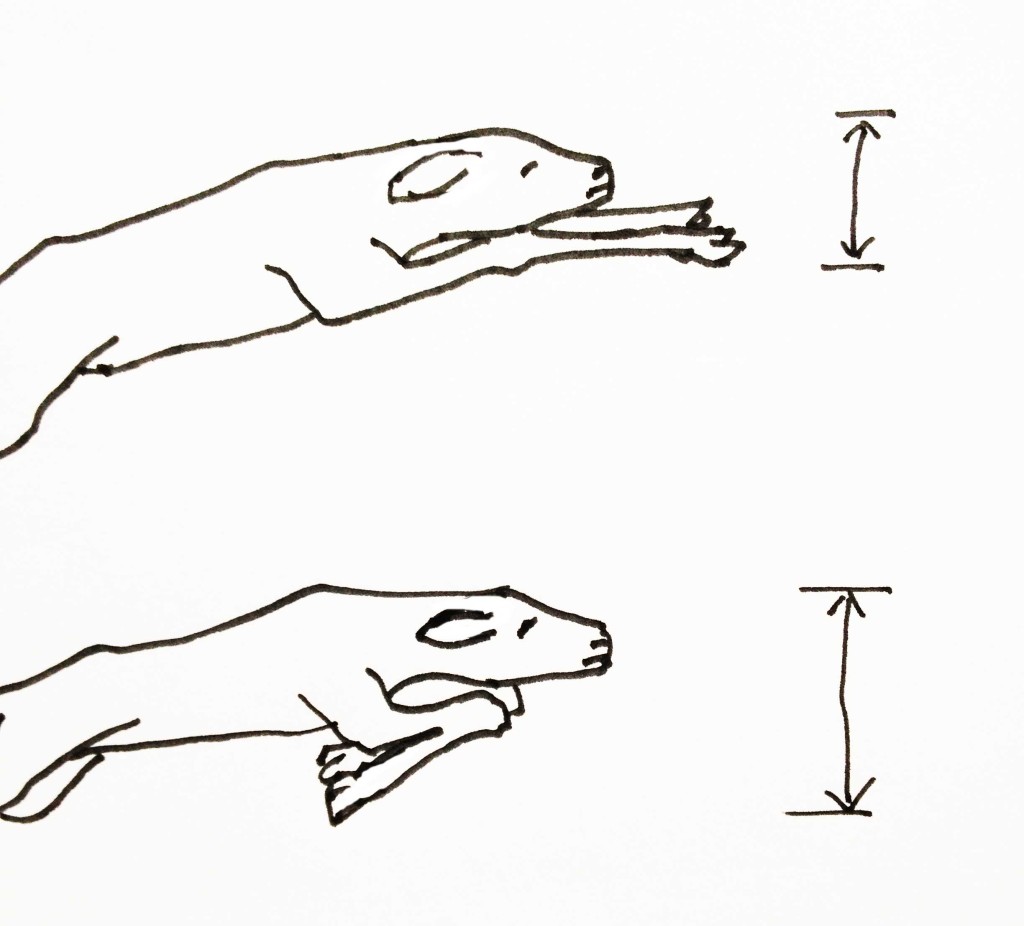 Poor ol’ Mrs Suffolk just didn’t have the strength to push this thing through.  Normally in a situation like this, the best thing to do is to clip your fingernails, push the lamb’s head back in,  then reach waaaay in and re-arrange the lamb so that the feet come first, then let the ewe proceed.  But in this case, there is no way I can push that huge swollen head back into this very strained and tired ewe.

The next time she lays down I keep her down, let her rest, and breathe.  The lamb is breathing, amazingly, despite its swollen purpleness. There is nothing to hold onto; I can’t pull on the lamb nor can I push it back in. I don’t want to hurt the lamb or the ewe… but as luck would have it, the brief respite I’d imposed allows Mrs Suffolk to resume another contraction with renewed vigor.  A foot, perhaps a knee, emerges.  Once I have something to grasp I pull, and slowly, out comes the biggest lamb I have ever seen.  Later, we weighed her at over 17lbs!

Assuming it’s over and with great relief I consider how to get this pair back down to the barn.  The lamb is soon able to stand, though her head is so swollen that she can’t actually lift it more than a couple inches off the ground. This may be a problem for nursing – we’ll get to that later.  Despite her trauma in the birth canal, she’s strong. But then, before we can proceed, Mrs Suffolk is pawing at the ground again: another lamb.  One little push and he glides out like a fish.  He is orange (as second lambs often are), also strong, and half the size of his sister.

After a moment’s rest and a bit of licking, I gather both lambs and invite my lady to follow me back to the barn.  She knows the drill and while she is yelling at me the whole way, she dutifully follows into the already-assembled lambing pen, where I set both lambs down so I can wrap the bungee cords to secure the pen.

This should be the part where things settle down so I can get to the business of ensuring the flow of milk, providing food and water, dipping the umbilical cords in iodine, etc.  I start figuring out how to help the big lamb hold her head to the teat, and the swelling of her head and tongue has started to subside, but suddenly there’s blood from somewhere and I realize it’s the ewe lamb’s umbilical cord.  Crouching, I pick her up and turn her over, upside down in my arms, and blood spurts from her cord in a two-foot arc up and away from her body.

Gotta stop this, clamp it or something.  With what? Clothespin… dental floss? Paper clip… No, my fingers will have to do.  I don’t want to take the lamb in the house with me (her mother will object), need to get to the phone… Can’t hardly climb out of the pen while holding 17 lbs of struggling lamb with an umbilical hemorrhage who can’t even hold her own head up.  Somehow I found a clothespin but it was ineffective.

I sit back down, hold the lamb and the cord, and wait for Mom or John to come home.  It’s probably close to 6:00 by now so I don’t have long to wait.  The lamb is tired now and seems content to rest.  Her brother and mother seem fine and Mrs Suffolk doesn’t mind my presence.  About 40 minutes later I hear the familiar crunch of tires on gravel, and I know that with help we’ll get it figured out from here.

We got the cord to stop bleeding, tied and dipped, and everyone ended up just fine.  It took about ten days for the ewe lamb to be able to lift her head up completely.  But after that, she was completely normal. The only memento of her rather bloody entrance into the world was the name we gave her: Scarlet.

One thought on “Mrs. Suffolk”