Wetland Wool Farm is back! We have always been here, just got really busy and lost touch, so to speak.
The year 2012 was unique in that we had no lambs for the first time since 1988 when we first got sheep.

Ringo, who seemed such a promising young ram, had to go back to his breeder, and then to market. He had seemed interested in the ewes and made the same clumsy initial efforts we have seen with all our young rams, apparently consummation just did not happen.  There is only one use for unproductive rams….lamb-burger.
Enter Robert, another ram lamb from the same breeder. Only once was he observed consorting with a ewe [Ruth]. But 5 months later, they were all waddling around with bulging bellies.  Here is an example. 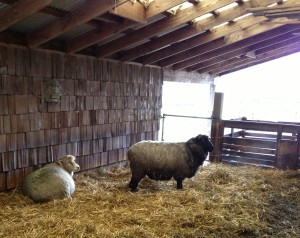 On the morning of February 20, John went out to feed the sheep and noticed Ruth was slow to get up and come to the feeder.  Unusual for her–she likes her alfalfa.  We had our oatmeal, then Marilyn went out to check the sheep before leaving for work and there was Ruth, busily licking a lamb.  Dashed back to the house, changed shoes and coat, summoned John.  He opened up the lambing pen and placed the newborn lamb inside.  Ruth followed immediately, but there was already a “water balloon” emerging, soon followed by a second lamb.  This one was a bit bigger, so Marilyn took hold of the little hooves, reached in to feel the nose and forehead, and pulled when Ruth pushed.  Two pushes and he was out.  We set up feed and water and secured the pen.  Marilyn went inside to change shoes and coat, came out to leave for work when John shouted that there was more labor going on.  Back inside, change to farm shoes and coat, and by the time she was back in the barn the third lamb had arrived.  Finally, navels were dipped, noses cleared, and all seemed relatively peaceful.  The lambs weighed 7, 9.5, and 8.25 pounds.  Ruth was carrying almost 25 pounds of babies! 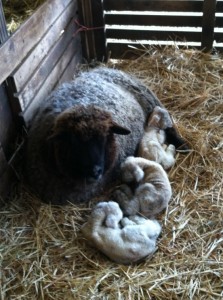