Spinning wheels are such things of beauty.  Their steady whirring is soporific, and great fluffy batts of fiber become fine or thick, even or lumpy yarns.  One might wonder why a spinner has more than one wheel.  In the old days, when spinning was a necessity and the only way to get fabric, when every American home had a wheel and a loom, people only had one wheel.  There was no space for more!

But in the 20th and 21st centuries, when the ancient arts very nearly died out, those who resurrected them found meaning in the artistry rather than the necessity.  Which leads to this beautiful wheel, made by Schacht of Colorado.  It isn’t rare or unusual, just a very fine piece of workmanship that I love to use.  Even if you don’t know how to spin, don’t you want to just sit behind it, make it go around, admire the beautiful laminates? 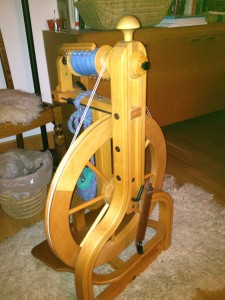