In March and April we enjoyed many good times with friends and colleagues.  Brenda and Bill Leppo came for lunch and Bill was “hooked” on the ‘you bake it’ baguette that went with our current standard menu of chicken & vegetable soup, pear & walnut salad, and bread.  Jon and Barbara Schleuning [Jon is one of the founders of SRG partnership, where John worked for over 20 years] also came to visit.  Barbara is involved in learning about watercolor painting, and has joined several international travel groups in pursuit of this new passion.  It was great to see them.  Sharon and Roger Bolmeier wanted to see the photos from our most recent trip to Australia, so we spent a fun afternoon sharing the adventures from Sydney and beyond.

Meanwhile, we spend our evenings in the studio and things get woven.  Sharon put in a request for a table runner, and it occurred to Mar that table runners would afford a great opportunity to experiment with the hook joint learned  from Saori websites.  It was fairly quick to wind a three-color warp that only required 80 threads, and easy to make it long enough to weave two runners.   There was lots of blue-green yarn dyed with Landscapes dyes in the color “ice,” which paired well with a deep maroon.  The borders and center sections incorporated some of the yarns we dyed together back in January. 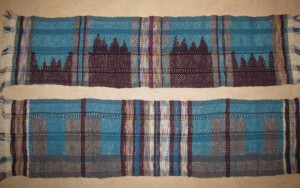 John has completed more than half of his latest weaving, which was inspired by a pattern called “butterfly”.  However, Tracy [aka TJ] thought it looked like a beautiful seed pod pattern.  See for yourself. 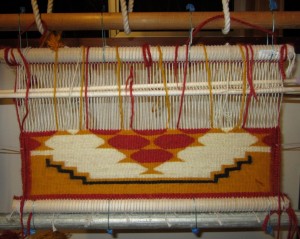 At this moment, John and TJ and friend Jessie are on native land in northern California for the Buckeye gathering.  This annual event brings together people who share interest in the ancient arts such as basketry, hide tanning, and fire building.  There are many classes to take and communal meals and evening campfires.  More about that after they get back next week.